Club News
Striving to Do Better - Living the Four-Way Test 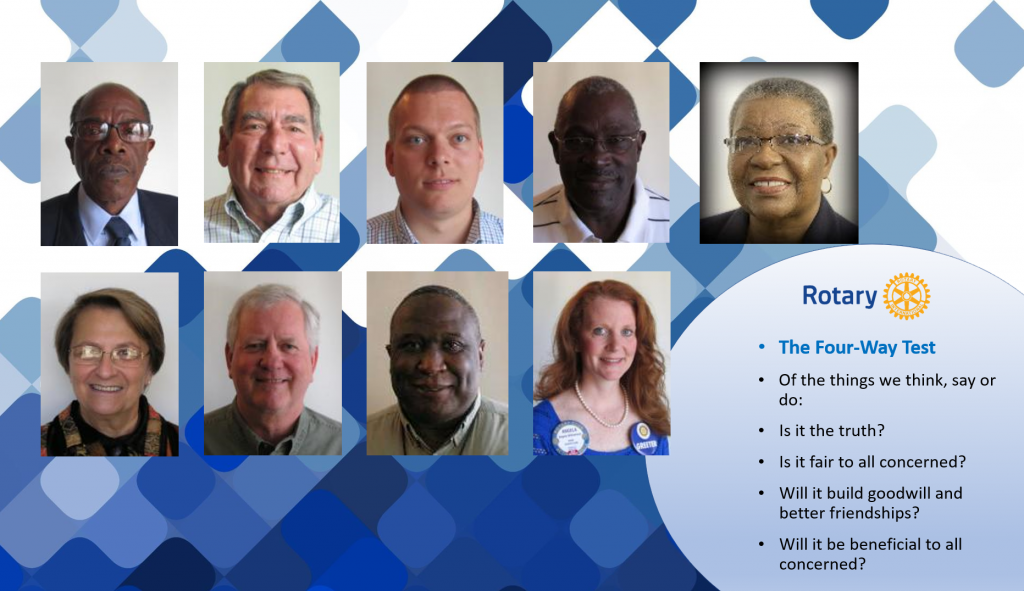 As we enter our 100th year, the Rotary Club of Thomasville is placing renewed focus on Rotary’s code of honor--the Four-Way Test. To define those efforts and bring the Test to life, we gathered input from members of the executive board and from members of the club.

President John Brown and his board are making the Four-Way Test part of its Code of Conduct. They also hope to weave the Test into the very fabric of our club and our individual members’ lives. The intent is to strengthen our club and to encourage our members to apply the Four-Way Test to their work, family, social, and community lives.

“The result will be a better club, serving our community in more meaningful ways,” said President John. “I firmly believe that as our members commit more fully to living the Four-Way Test, we’ll also become better people—in our businesses, our families, our friendships, our churches, and in every other way we connect to the community.”

What is the Four-Way Test? It’s twenty-four words. Only twenty-four words. But, taken to heart and put into action, they are powerful words that form a foundation for truth, justice, friendliness, and helpfulness. At its core, the Test focuses on doing what is right.

The Four-Way Test of the things we think, say or do:

Created in 1932 by Chicago Rotarian Herbert J. Taylor when he took charge of a company facing bankruptcy, the Four-Way Test became a guide for that company and its employees. Their ultimate business success is credited to the simple philosophy.

In 1943, Rotary adopted Taylor’s Four-Way Test as watchwords for Rotarians worldwide. The Test has been translated into more than a hundred languages and published in thousands of ways. It is one of the world’s most widely quoted statements of business ethics.

Rotary Clubs around the world have worked through almost eight decades to ingrain the Four-Way Test in members’ daily lives. The Thomasville club is no exception. A silk-screened banner of the Test hangs behind the speaker’s podium at every meeting—it’s been a tradition for at least 40 years. Wallet cards and desk placards, discussions at fireside chats, reciting the Test at club meetings, special speakers and an annual four-Way Test Award honoring a club member are among the methods the Thomasville Club has used to encourage an understanding of and adherence to the Test.

Today, as our club renews emphasis on the Four-Way Test, we asked Rotarians to summarize how they view the Test and what it means to them. Here’s what they said:

Herbert Taylor said in 1943 when summarizing the impact of the honor code he created and applied to his business: “We found that you cannot constantly apply the Four-Way Test to all your relations with others in business without getting into the habit of doing it in your home, social and community life. You thus become a better father, a better friend and a better citizen.”

For more about the Four-Way Test, visit the Rotary International website or open these links: